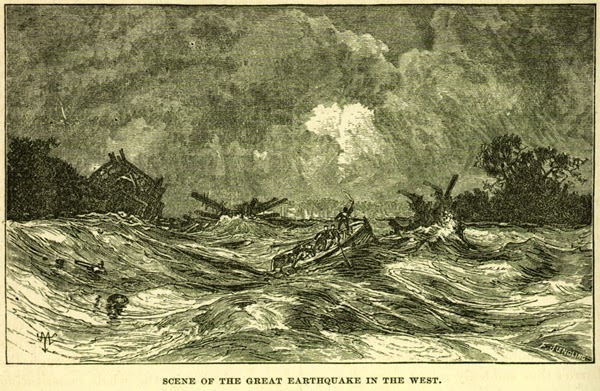 The Franklin County Atlas from the 1880s is brimming with interesting tidbits, maps, stories, details ... just some very fun reading. The books are about 18 inches by 24 inches and the ones on file are reprints of the originals.

I came across this offering from the "publisher" of the book, who isn't identified. This one is titled

In searching for old fragments of local history here in the Whitewater Valley, one occasionally hears, or sees in print, something regarding the above occurrence. Perhaps the only account of it, here, is preserved in the papers of Mr. Wiley, from which liberal quotations have been made in this work. He says:

"The same fall in which the battle of Tippecanoe was fought (1812), the whole Western country was shaken by earthquakes of a severe kind. These lasted the largest part of a year, in which we could have occasional shakes, but they were not so severe after the winter passed by. The first shock was on Sunday night, or rather Monday morning. I and my family were asleep when the cracking and jarring of the house awakened us, and I saw the cradle rocking in the midst of the floor, without any hand touching it. I was then living in part of my father's house, and I and my brothers started up to search for a file of newspapers in which we remembered to have seen some articles on earthquakes. We found the articles, and they assured us that there was no danger from this phenomenon, unless in mountainous regions, and we went to bed and slept quietly.

"We day arrived, I felt anxious to have another shake, that I might witness its appearance by daylight, and I was soon gratified, for after we had finished feeding the animals, I was leaning against the fence, I felt it begin to shake, and looking at the barn, I saw it shake fearfully.

"This shake satisfied my curiosity, and I would have been glad for the to have been the last, but the thing having begun did not end so readily, for in February we had shakes still more terrible. We were at a loss to account for the "seat of Empire" of these shocks; we were sure from the movements it could not be in the Allegheny Mountains, and we though the Rocky Mountains too far off.

"After some weeks of suspense, we learned that the seat of rivers was in the Lower Mississippi Valley. This destroyed our faith in the newspaper articles. We concluded that if fire and rivers could burst up from under the Mississippi, that the Ohio, or even the Whitewater might be disturbed in a similar manner.

"The whole country became alarmed, and the most hardened sinners began to tremble and quake, and go to meeting, and weep and pray. There was one man named William Ramsey who I had regarded as one of the most profane and wicked men I ever knew, who became as tame and timid as a lamb. he afterward became a useful preacher, and continued sofor years, while he remained in our part of the country."

OK, the facts are:

The New Madrid earthquakes allegedly caused church bells to ring hundreds of miles from its epicenter. The Mississippi River reportedly ran backward. Had this been a modern quake, the devastation would have been incalculable.

What "Mr. Wiley" is describing would have been, at best, frightening in a time when the news was usually 6 months late. The article did not say where "Mr. Wiley" lived.

The first quake occurred in December, 1811. The battle for Tippecanoe was fought about that time and was considered important in the battle when the Shawnee leader known as the Prophet claimed it to be an omen for victory. (That didn't happen.)

A series of major shocks occurred well into the next year.


"The area of strong shaking associated with these shocks is two to three times as large as that of the 1964 Alaska earthquake and 10 times as large as that of the 1906 San Francisco earthquake. Because there were no seismographs in North America at that time, and very few people in the New Madrid region, the estimated magnitudes of this series of earthquakes vary considerably and depend on modern researchers' interpretations of journals, newspaper reports, and other accounts of the ground shaking and damage." 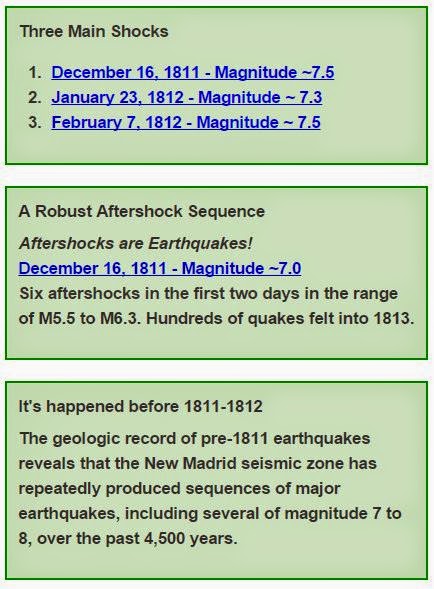 SMITHSONIAN STORY ON THE GREAT QUAKE