First off, this isn't an essay on why we ought to be guilty about how the native Indians were treated during the pioneer settlement era. The crimes against the tribes are well-documented.

Instead, this is a tip-of-the-iceberg attempt to examine some of the tribes which inhabited the area at the time the Carolina settlement began to occupy lands in what was then known as the Northwest Territory.

Fairfield Township is on the cutting edge, literally, of the time. The western edge of the township, about a mile west of where the town stood, was the boundary for the Greenville Treaty of 1795. At that treaty signing, the whites agreed to stay east of the line and the tribes could have everything west of it. That included Chicago and we all know how THAT turned out. 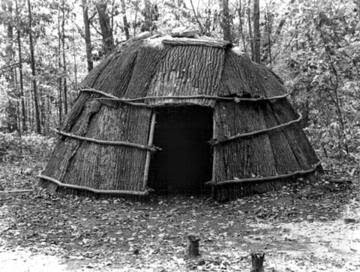 Most of the tribes went along with the deal, brokered by the fabled Mad Anthony Wayne, for whom Fort Wayne is named. Either him or Bruce Wayne, who was also Batman.

Tribes in the Indiana-Illinois-Ohio-Michigan area at that time were Pottawatomie, Wea, Iroquois, Miami, Kickapoo, Piankashaw, Delaware and Shawnee. Trying to keep track of all their movements and leaders is next to impossible. A few guys you might start with are: Tecumseh, his brother known as the Prophet, and Little Turtle. Search at your whim. For fun, also search for Princess Mishawaka and Grey Wolf.

Main land brokers were the Miami, who sold off most of the state to William Henry Harrison even though they probably didn't actually own the land. That happened in a series of cessations over a period of about 40 years,

“Between 1818 and 1838, the American Indians of Ohio, Indiana, and Illinois gave up most of their land except for small reserves. The Wyandot alone relinquished title to four and a half million acres. The Miami ceded 6,700,000 acres in Indiana, and 297,000 acres in Ohio.”

The Fairfield area was mostly inhabited by Shawnee, who sustained a fairly large footprint across most of the eastern half of the country, ranging south to the Carolinas and north into parts of Canada. They ended up generally in Oklahoma after officially leaving Indiana. Various historical essays suggest the Shawnee were still in Indiana in the 1840s, though in small unorganized numbers.

We mentioned Tecumseh and the Prophet, his deranged brother. Those two had conspired to make war on the whites, angry that treaties were being signed for the removal of the native tribes. Well ... they had a point.

They just didn't do wars very well and in 1811, the battle of Tippecanoe crushed the native resistance to white advancement in Indiana. I've seen various accounts of that battle. The Prophet had the deluded notion that the New Madrid earthquake and the appearance of a large comet were good omens. They were omens, all right.

The following year, 1812, when the U.S. was at war with England, native tribes were thrust into the fray again and at least one report claimed renegade Shawnee in the Whitewater Valley were creating problems. I found no evidence of any atrocities, however. Shawnee sided with England in the war, the result of poor judgment. Tecumseh was killed in a battle in Canada, and that was that.

The valley itself is ripe with Indian history and the ancient Mounds tribes left lots of arrowheads and artifacts along the East Fork of the river. Anyone who grew up in Fairfield probably had at least one arrowhead. From Farm Hill south toward Brookville, lots of old mounds -- which date farther back than we can know. Mound builders were common across the Ohio Valley, as far as the Illinois territory near Kaskaskia. No one seems to know what ended their existence.

Elsewhere in Indiana, Pottawatomie and Miami are still in evidence, though in small numbers.

An old bridge across the Whitewater between Fairfield and Dunlapsville was known as Shawnee Ford.

-- The wigwam pictured here was apparently fairly standard housing for a 19th century Shawnee family.
Posted by John C. Updike at 11:11 AM