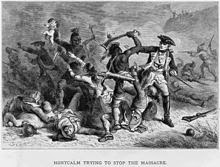 Trying to keep this simple, perchance to make it interesting, the deal was:

The Brits and the French were snarling at each other for the 11th time in 11 centuries, this time in what they called the Seven Years War. It was being held in Europe with many lords, earls, dukes and sir-types all involved. As usual, the soldiers were catching the rotten end of the pole. This was in 1752.

A couple of years later, the war spread to North America where the vastly outnumbered French wanted squatting rights at Fort Duquesne, home of the Pittsburgh Parrots. The fighting commenced in a raucous fashion and up stepped a guy we all knew as Geo. Washington, who single-handedly led the Americans and the Britskies to a hard-fought victory. Later, George would have his picture on the quarter. Later on, in a fantasy land we call "the capital."

So ... around 1763, the British and the American Colonials defeated the Frogs and their indigenous allies (aka the Cleveland Indians) and took control of all the land east of the Mississippi River, except for Florida (which Spain got in a 3-way trade.)

Fast-forward to a later time when the Americans, fed up with Lipton and the Hanovers, tossed the tea into the sea (get it? tea in the sea?) and all hell broke loose, leading to Betsy Ross making a flag and Geo. Washington asserting that all we had to fear was the porcupine.

As a result, the new United States got all the land that the French had lost in the previous war (the French and Indian war, as we learned in 5th grade) . . . and by 1800, the new president, Th. Jefferson, introduced the 2-dollar bill and told people to go west, and speak with Horace Greeley.

Seriously, Jefferson's expansionist dream was generally the result of making it up as he went along, but the migration of settlers into the Ohio Valley and finally into Indiana was the stuff of legend. Genius, in fact. Deceitful, opportunistic, at times violent and cunning. But it worked.

By 1801, the first settlers left South Carolina and came up the mountainside, cut through to the west and came up through Kentucky to the shores of the great river Ohio. There, they began the process of building their homes.

I assert here, as an anecdote, that Jefferson bought the Louisiana territory on the west of the Mississippi from the French in 1803 despite the fact that the purchase was unconstitutional. Jefferson said, "To hell with the law. I'm buying it anyhow."

-- I have no idea who produced the brutal battle scene that I've used to illustrate this post. But, thanks.