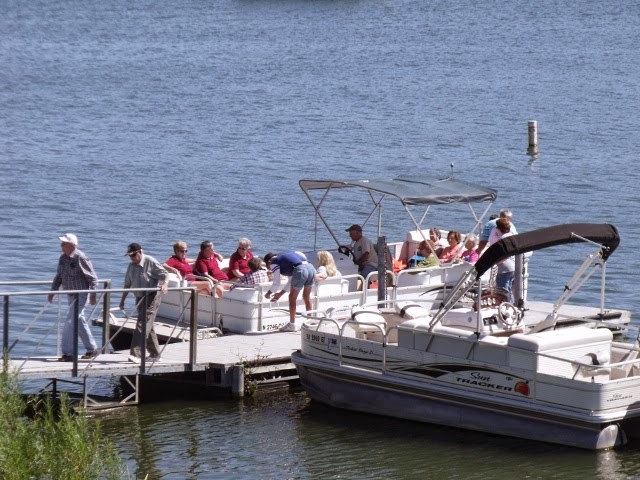 Quakertown was originally called Millville, and was one of two communities to be lost to the reservoir project.

A bit of conflicting history, which isn't unusual, claims that the town was established by the Test family in the early 19th century. An article in the 1884 Union County Atlas says a Quaker named Nathan Henderson was the first settler. We will split the difference and say both of them were on the spot when the first fence railing was cut. The Test family cast a visibly larger shadow, for what that is worth.

Research suggests that the name of the town is in deference to the fact that no Society of Friends church ever existed in Quakertown, though Quakers were prominent across Union County in that time. There was a Quaker church in Fayette County and the sect was eventually quite prominent in Wayne County, notably Richmond and Centerville. As well, the Quakers tended to attract other like-minded sects, abolitionists such as the Universalists.

But the town had a Methodist Church ...

According to an article in "Fairfield: The Town Under The Lake":

"Services were conducted in the upper story. The room was furnished with settees on one side of the main aisle, and they were occupied by the ladies. On the other side were rather crude benches with straight backs, and the men and the boys sat there. An organ furnished the music, and a platform at one end of the room served as the pulpit.

"The building that housed the Quakertown store was destroyed by fire in 1911 while being operated by the Stanton brothers, sons of the original owner. Kirkwood and Wade Stanton built a new structure, using the existing foundation and that store remained in business until the automobile made it possible for their patrons to go to larger trade areas." 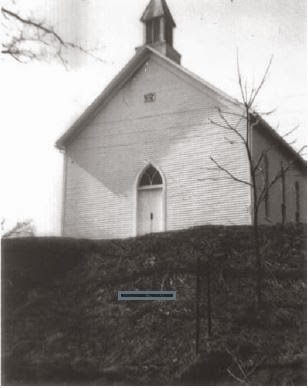 A church was built in 1892. (Photo courtesy Marilyn Luke Gausman)

According to History of Union County, 1821-1988, the Stanton's building remained empty for some time until George Bridenhager, Liberty attorney and postmaster, purchased it for use as a summer home for his family. When it was learned that the Brookville Lake would be a reality, the Bridenhagers sold the building to the Treaty Line Museum, located in Dunlapsville. (That will be explored in another blog entry, but the building is on display.)

It was a scenic town, and there were a few houses on the hill. There were two roads running through the town, the main road and one heading up the hill. They were known simply as the low road and high road. On the corner of the low road was a huge building that served as many things over the years, including a store and a mill. Next to that building was a stone foundation with a railroad spike hammered high into the wall. That spike reportedly marked the water level of the 1913 Flood.

An article that appeared in the April 16, 1869, Brookville American claimed the death of Zaccherus Stanton, at age 90. He was the oldest man in Union County. The same writer has the following: The oldest grave yard in Union County is almost half a mile below here (Quakertown) on the East bluff of the river on the farm owned by Bennett Osborn. The first white person ever buried in the valley or country of the East Fork of the Whitewater was at this grave yard. Her name was Annie Cunningham, a young lady about 17 years of age. She was buried in the fall of the year 1807…The first frame house ever built in Union County is still in existence, and is now owned and occupied by John W. Maze, about one mile south-west of here. It was built by our highly esteemed and venerable old pioneer, Adam Pigman, Esq.”

Union County Atlas of 1882 adds this:

This village is situated near the northern boundary of the township ... and is the principal commercial point, being the natural center of a large and thrifty neighborhood.

It consists of a flouring mill, store, post office and blacksmith shop. Its natural advantages are inviting to the capitalist and businessman, having, in addition to what has been mentioned, the best natural site for hydraulic power of any point on the river.

The first settler on this site was a Quaker by the name of Nathan Henderson, who built the first mill of the place, which was quite a rde affair, containing one run of buhrs (a hard rock for making millstones).

Here, the Quaker did a small business; so slowly did the mill grind that it was a saying among the old settlers, that "the mill would grind one grain -- and then grind another."

This mill or at least the mill site, finally fell into the hands of Samuel Test. In 1826, it was quite a mill, having two run of buhrs.

It changed hands a number of times and is now owned by Paul Gardner.

There was also a woolen factory and carding machine (for combing wool) operated here by Samuel Test, Jr., and an oil mill.

Subsequently, Benjamin Bond became possessor of the woolen factory, and in 1848 Zaccheus Stanton & Sons, who operated it until 1857, when the machinery was sold and a general store started in the building, by J.M. Stanton, who was in April, 1866, commissioned the first Postmaster of Quakertown, and who is the present incumbent. 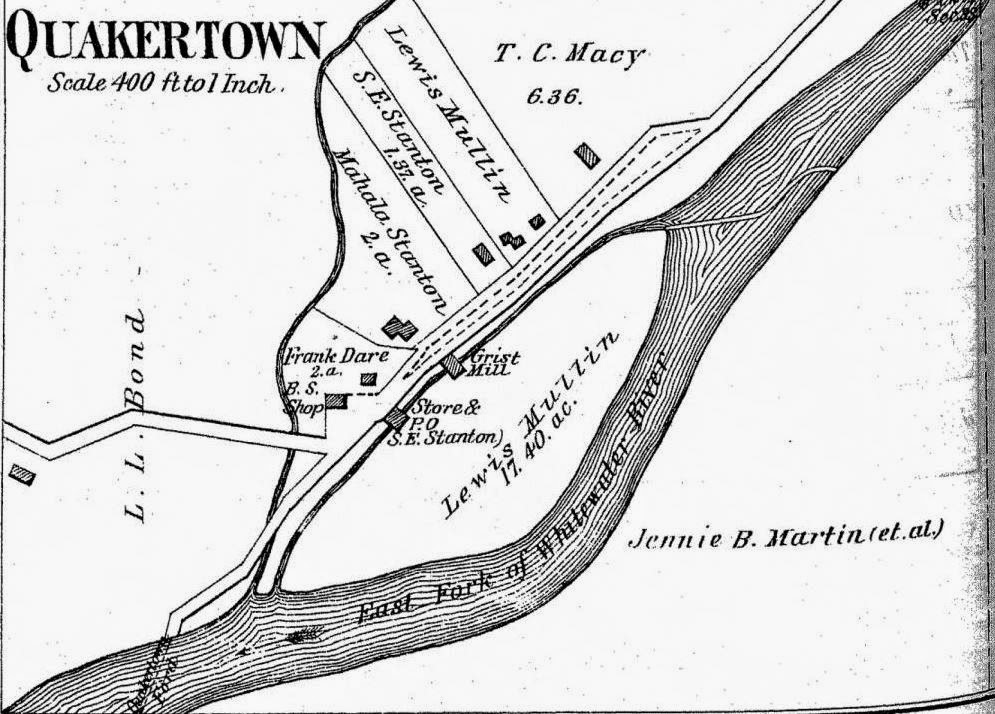 An 1880s map of Quakertown. The Mullin family was among the early settlers in Fairfield Township, which included Harmony Township until 1821, when Union County was formed. Quakertown was the only settlement in Harmony Township. 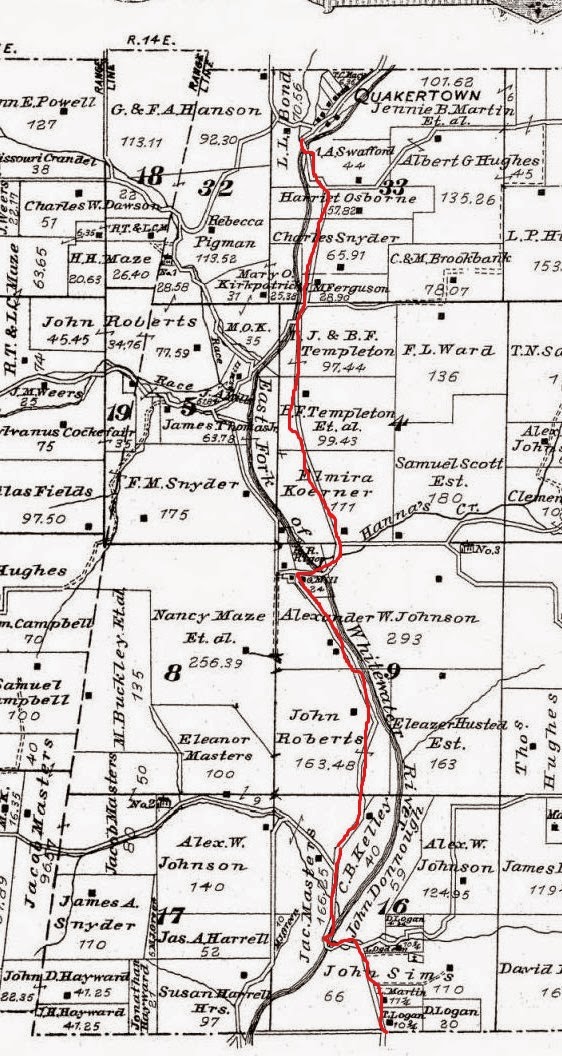 Prior to 1934 when Indiana SR101 was built, one left Fairfield (not shown) and headed north on the road (follow the red line) to Quakertown. This map shows that a traveler would cross the river three times. Apparently the road was built more for local value than for efficiency of distance.