One of the alleys I walked in pursuit of trivial and interesting tidbits about the town's history took me to a man named Robert Green.

The original settlers in the Fairfield area -- Hanna, Templeton, Logan, Ewing -- showed up within a sensible time frame. They had all come from South Carolina and had all entered the valley within a year or so of each other. Ewing actually didn't, but he's still pretty close to the lead dog.

Green ain't in that group.

Yet August Reifel's 1915 history suggests Green was the first person to enter land in the township, January 1804, Section 23 ... and that's all it ever says about him. What puzzled me was, if he had been among the original group of Carolina settlers,why isn't he mentioned as part of it? What happened to him? He bought land before anybody else did, vanished from the face of the Earth and that's that. Reifel disappointed me. 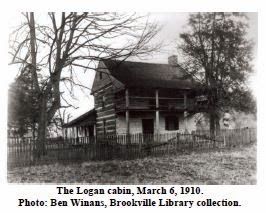 Green is simply a matter-of-fact guy who had the money to buy land he never intended to use. He came from somewhere for a reason, bought land for a reason and ... see ya boys!

Reifel's insertion of this "fact" was parroted by everyone who used the 1915 history as "gospel." Reifel made more than one mistake in his 1,280-page documentary. (By the way, most county histories were written that year. The library is full of these things.)

So I did some snooping through old Bureau of Land Management files and found Robert Green -- and yes, it appears that REIFEL WAS WRONG.

And he will always be wrong. Green entered the land in 1814 -- a full TEN YEARS after Reifel claimed he did. He probably should have known this, maybe did and had a brain cramp. He is dead, therefore forgiven. We are fairly certain that Green is also dead.

Green sold the land in Section 23 a couple of years later to a man named James Risk. I have no idea what happened to Risk. Green shows up a few other places in Union and Dearborn counties, alleging it's the same guy. I don't know more about him than that.

Section 23, the SE corner where Green bought, is just north of the Old Franklin Church.

Now if you will excuse me, I have to fix some history.

-- The accompanying photo is of the Logan cabin. Robert Green may have spent time there.