The non-existent town of Philomath is useful for a Fairfield history for no real apparent reason.

It's just interesting, is all.

First off, Philomath actually doesn't exist. It was supposed to exist and it almost existed, and the people who wanted it to exist were downright doggedly determined to make it exist.

The word means "lover of learning," and that's effectively what the place set out to be, after an original attempt to call it "Bethleham." One would suppose that "Bethleham" (or "Bethlehem") had already been taken.

It's in Union County, a few crow hops north of Brownsville, and it currently has a couple of farmhouses. But a 19th century map shows it was platted with streets, and a "college" lot that makes Philomath more interesting than just rudimentary trivia.

Its founders were the Rev. Jonathan Kidwell and Joseph Adams, who in 1832 posted a notice in a Cincinnati newspaper:

"Know ye that we, the undersigned,have purchased the town plat of Bethlem, Union Co., Ind., and intend to lay off and attach the said plat to the town of Philomath. All persons having claims on the said plat of Bethleham, will attend to this notion, come forward and establish their caim, or forever hold their peace."

So, in June 1833, Philomath was born and a man named Nathanial Chapman opened a grocery and gin mill.

Kidwell had an agenda. He was a Universalist minister and was in charge of spreading the word of the church across the southeastern corner of Indiana. He worked hard to make Philomath succeed.

The proprieters of the village advertised extensively through the press. "All useful mechanics who wish to settle in this village are requested to call and examine for themselves -- millwrights, carpenters, house joiners, masons, cabinet makers, a good book-binder, a tinner -- have choice building lots on a good credit, at a fair price and pay for the same in their own professional labor. Strangers are requested to bring credentials of their moral character, as none but men of sober habits and good morals will be employed, and all such will find it to their interest to give us a call."

Kidwell and Adams wanted to turn the town into an educational utopia, the seat of the "Western Union Seminary" -- the place where the Universalist creed could be studied, promoted and advanced.

Kidwell's "seminary" didn't ever amount to much, if anything. The town plat shows it's on the map, but it was probably nothing more than a cabin in the woods where Kidwell ran a printing press promoting his Universalist doctrine. The church did hold a "regional" conference there, but one wonders exactly how that worked.

The Universalists were strict abolitionists (as were the Quakers and Presbyterians) and were significantly more creative in their approach to Christianity. Their philosophy was effectively just an open-door policy, guaranteeing salvation for everyone based on the principle of an abiding and benevolent divine creator. The sect endures in different forms today.

Kidwell's reach is rather broad, from Richmond southward to Cincinnati. A Universalist church was founded in 1840 in Fairfield and existed for about six years and guess who its minister was?

The Universalists established churches in several towns in the Whitewater Valley with a fairly large one in the area east of Billingsville near College Corner, Ohio. 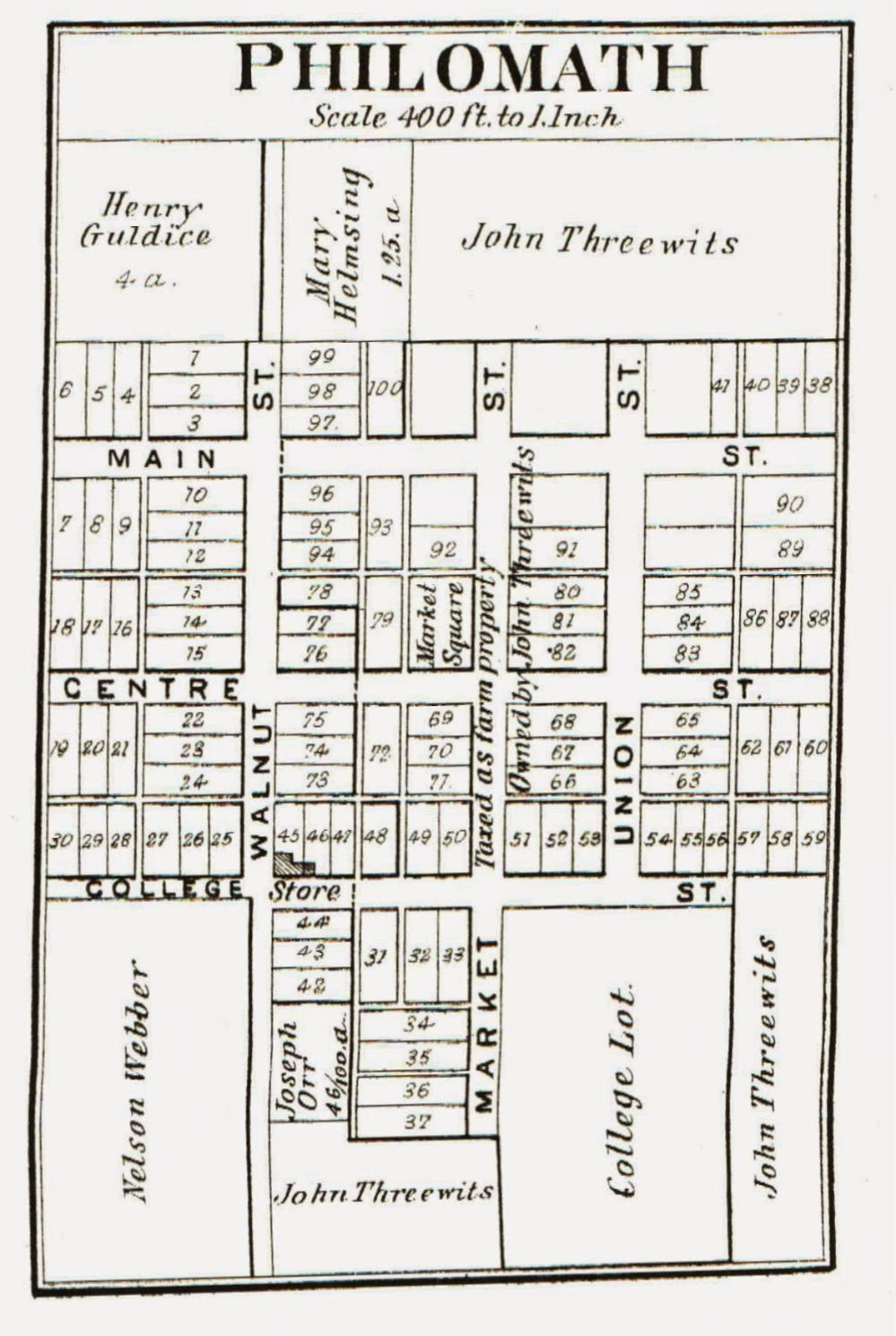 The "College Lot" was where the learning occurred. Some reports, however, claimed that visitors to the town didn't find the place to be "very smart." Note that everything was taxed as "farm property."

Sources on this are varied, including an 1884 Union County Atlas and the Indiana Magazine of History.