Fairfield's most famous author had almost no real connection to the town, though his legend extends quite a distance.

James Maurice Thompson, usually just referred to as Maurice, was the author of a novel called "Alice of Old Vincennes," a rousing epic about a girl and a priest in the western Indiana territory in the time of the American Revolution. 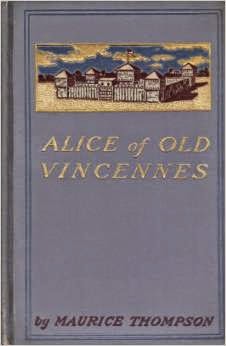 Maurice, though born in Fairfield, didn't live there very long. His father, a man known as "Old Thompson," was a Baptist preacher.

"Old" was Grigg Matthew Thompson, eldest son of Wilson Thompson who had been one of the most eloquent and influential Primitive Baptist ministers of the Midwest.

According to a Scholarworks article published by Indiana University about Maurice's grandfather, Wilson Thompson ...

After years of itinerant preaching and wandering in Missouri, Kentucky, and Ohio, Wilson Thompson settled in the Connersville area about 1834 when he was in his middle forties. He still preached in many churches and was often minister to several at one time. In counties adjacent to Fayette, Rush and Franklin for example, he was long remembered as an oracle from afar, called in to revitalize flagging faith with thunderbolts of oratory.

"Old," the son, attempted to carry on his father's mission, with marginal success as the winds of religion had begun to shift. The Primitives were usually in disagreement about doctrine, it would seem.

Young Maurice rambled through life as he and his brother Will tried to distance themselves from the Primitive Baptist culture. The Methodists and Presbyterians were far more influential in those years, most research concludes.

The outlines of his life help to explain his inner, personal complications. His father had been a strong-minded, strong-bodied Baptist minister who was living at Fairfield, Indiana, when James Maurice Thompson was born in 1844. Some 10 years later the family settled in Georgia where the Thompsons had acquired a plantation and lived as back-country aristocrats. Thompson's early education included some tutoring in the classics and liberal arts. But the family may have felt insecure in these years. They were never firmly established Southerners. He served three years in the Confederate army (a very young veteran of the battle of Chickamauga), but after the war he could find no future for himself in the South.

Eventually, he did get elected to a single term (1879) in the Indiana General Assembly, as a Democrat.

In 1900, Maurice visited Vincennes and researched the people and time, wrote "Alice" and became a literary hero for a time. He died a year later.

He had, along the way, other published works that were met with indifference. He also became somewhat of an expert in falconry and archery techniques.

His personal beliefs are more complex, and he was ambivalent in some areas about slavery, calling it evil in the abstract but genuinely romantic as it applied to the Southern way of life. In effect, he was a literal racist.

For the pure Negroes there is hope for a very gradual development along certain lines. As makers of policy and leaders of a community, they have no real potential whatever. They are created to be ruled and to make their contribution to society in their own way, primarily as servants and entertainers.

"Alice," as a novel is dated in its use of grammar and sentence structure, but it's still compelling literature.

From literary critic Charles B. Lasselle in 1908:

The story of "Alice of Old Vincennes" ... is so realistic that a number of the writer's friends hare requested him to point out such characters and events as would justify its claim of being an "historical romance." As to Alice herself, she was a real person, well known to the early inhabitants of Vincennes. Her real name was Mary Shannon. She was the daughter of Captain William Shannon, one of Colonel George Rogers Clark's most patriotic and gallant officers.

How do we know "Alice" was real?

(Thompson) knew "Alice" well in her old age. It so happened that her youngest son, named William Shannon, after her father, and (Thompson) were playmates together, and their families being near neighbors, he often visited her house. In her personal appearance and character she was well described by the author. But he states several times that she was not to be regarded as beautiful. The writer would have thought otherwise, and that in her girlhood days she must have been a beautiful girl. The most prominent features of her character were her independence and kindness. She was, in fact, such a woman that the men would have called her "grand old lady" and the ladies "a sweet old lady. 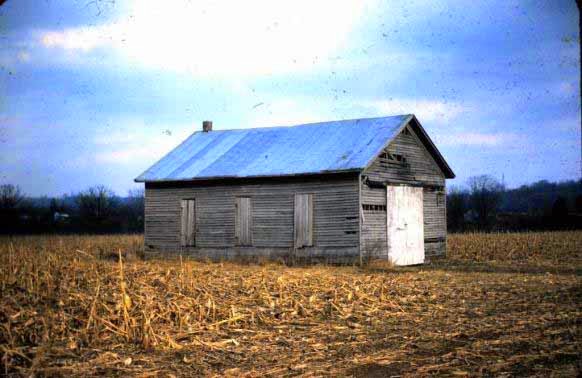 We know this building served as a Baptist church about ... well, a zillion years ago. It was located just west of the covered bridge on the road to Blooming Grove. We always thought it was just an old corn crib. Jim Senefeld took this and many other priceless photos of the valley. Could this have been the "Old" Thompson church?

Some "Alice" characters as Thompson presented them in the story:

* Alice Roussillon was tall, lithe, strongly knit, with an almost perfect figure, judging by what the master sculptors carved for the form of Venus, and her face was comely and winning, if not absolutely beautiful; but the time and the place were vigorously indicated by her dress, which was of coarse stuff and simply designed. Plainly she was a child of the American wilderness, a daughter of old Vincennes on the Wabash in the time that tried men's souls.

* Men like Gaspard Roussillon are of a distinct stamp. Take him as he was. Born in France, on the banks of the Rhone near Avignon, he came as a youth to Canada, whence he drifted on the tide of adventure this way and that, until at last he found himself, with a wife, at Post Vincennes, that lonely picket of religion and trade, which was to become the center of civilizing energy for the great Northwestern Territory. M. Roussillon had no children of his own; so his kind heart opened freely to two fatherless and motherless waifs. These were Alice, now called Alice Roussillon, and the hunchback, Jean. The former was twelve years old, when he adopted her, a child of Protestant parents, while Jean had been taken, when a mere babe, after his parents had been killed and scalped by Indians.

*Madame Roussillon, a professed invalid, whose appetite never failed and whose motherly kindness expressed itself most often through strains of monotonous falsetto scolding, was a woman of little education and no refinement; while her husband clung tenaciously to his love of books, especially to the romances most in vogue when he took leave of France.

* Although Father Beret was for many years a missionary on the Wabash, most of the time at Vincennes, the fact that no mention of him can be found in the records is not stranger than many other things connected with the old town's history. He was, like nearly all the men of his calling in that day, a self-effacing and modest hero, apparently quite unaware that he deserved attention. He and Father Gibault, whose name is so beautifully and nobly connected with the stirring achievements of Colonel George Rogers Clark, were close friends and often companions. Probably Father Gibault himself, whose fame will never fade, would have been to-day as obscure as Father Beret, but for the opportunity given him by Clark to fix his name in the list of heroic patriots who assisted in winning the great Northwest from the English.

* Long-Hair was not a young man; but it would have been impossible to guess near his age. His form and face simply showed long experience and immeasurable vigor. Alice remembered with a shuddering sensation the look he gave her when she took the locket from his hand. It was of but a second's duration, yet it seemed to search every nook of her being with its subtle power. Romancers have made much of their Indian heroes, picturing them as models of manly beauty and nobility; but all fiction must be taken with liberal pinches of salt. The plain truth is that dark savages of the pure blood often do possess the magnetism of perfect physical development and unfathomable mental strangeness; but real beauty they never have. Their innate repulsiveness is so great that, like the snake's charm, it may fascinate; yet an indescribable, haunting disgust goes with it. And, after all, if Alice had been asked to tell just how she felt toward the Indian she had labored so hard to save, she would promptly have said: "I loathe him as I do a toad!"

* It is safe to say that Rene de Ronville went home with a troublesome bee in his bonnet. He was not a bad-hearted fellow. Many a right good young man, before him and since, has loved an Adrienne and been dazzled by an Alice. A violet is sweet, but a rose is the garden's queen. The poor youthful frontiersman ought to have been stronger; but he was not, and what have we to say?

* Lieutenant Fitzhugh Beverley was a Virginian of Virginians. His family had long been prominent in colonial affairs and boasted a record of great achievements both in peace and in war. He was the only son of his parents and heir to a fine estate consisting of lands and slaves; but, like many another of the restless young cavaliers of the Old Dominion, he had come in search of adventure over into Kentucky, along the path blazed by Daniel Boone; and when Clark organized his little army, the young man's patriotic and chivalrous nature leaped at the opportunity to serve his country under so gallant a commander.