We'd be derelict if we ignore the surrounding communities in relation to the history of Fairfield Township, only because ... well, they exist. Almost all of them still do, which suggests they have a history they haven't readily identified.

Perhaps it isn't history at all, just the passage of time.

To the north, Harmony Township, to the east, Bath Township, and to the south, Brookville. To the west, Greensboro.

Big doin's? Well, actually not until around the middle of 1812, which isn't Blooming Grove's fault. It's that there wasn't much need for it until then. And until 1809, it wasn't legal anyhow. Complicated? Hardly, but it's worth a go.

Blooming Grove Township was founded in May 1817, and parts of it were once located in what is now Jackson Township in Fayette County, the area generally surrounded by the little town of Everton on State Route 1. 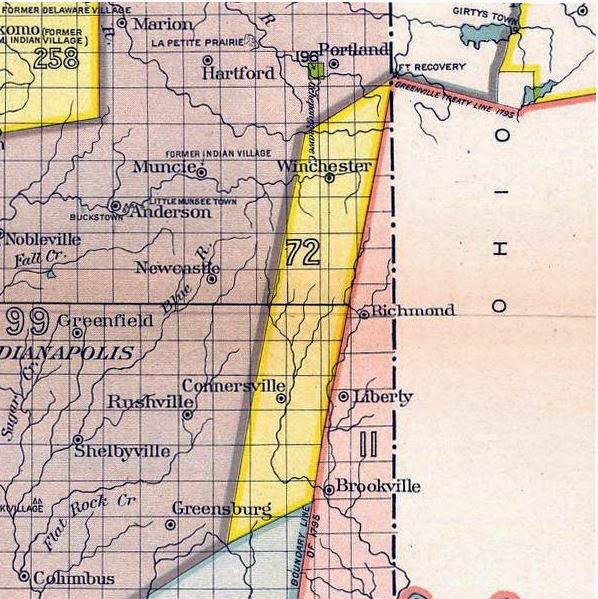 The township was carved out of a section of land known as the Twelve Mile Purchase, which territorial Gov. William Henry Harrison negotiated with the native Indians. That was in 1809 and the accompanying map shows where it was located. The area is just west of the Greenville Treaty Line.

Greenville Treaty was, at the time of Fairfield's founding in 1815, the western border of "white country." The Twelve Mile Purchase shoved the line westward to where the Fayette County town of Orange is located.

Settlement in that area was slow at first until something resembling a road developed between the economically prosperous settlements of Brookville and Connersville. The spot almost smack-dab in the middle was where the little village of Greensboro was born. Probably not much more than a trading post, with the route to the east toward where Fairfield was growing and to the west (Posey Township) where the productive West Fork of the Whitewater took traders downstream.

The 1882 Atlas of Franklin County says the first settlers in Blooming Grove Township were Jacob Blacklidge and Ralph Williams, who set up in 1811 near Duck Creek in the southwestern portion of the township.

The land was slowly bought up and the community was born along the "highway."

John Naylor and James Sherwood hired a surveyor named Joseph Allen to lay out the town in July 1816. They added a section the following winter and named their little hamlet Greensboro, which was the name of the town in Maryland from where they had emigrated.

The Atlas goes on to explain how it became something else before it became what it is. "The name ... was often perverted to Green 'Brier' by those who were interested in other towns than this one. Mr. Henry C. Hervey says, in a recent letter:

"The writer came to the town on the 1st day of September 1834 to being a six years' apprenticeship at a trade, which term he fully and faithfully served, and from that date to the present time has witnessed the growth and changes that have occurred. The oft-repeated statement about the original name of our village being Greenbrier is incorrect. The name was Greensboro."

So what went wrong?

When Greensboro applied to get a post office in the 1830s, the town was told that there was already a place by that name in Indiana. So they decided, since the township was Blooming Grove, so would be the name of the village. After that, the state legislature agreed that the town could change its name from Greensboro to Blooming Grove.

The Atlas adds some interesting trivia:

* James Hughell was the first white child born in the township.
* James Webb had the first blacksmith shop.
* The first schoolhouse was built in 1817 in an area owned by James Harvey, whose property also contained the first graveyard, just east of town.
* William Richardson built an early mill on Duck Creek.

Blooming Grove's social community in the early days and into the 1880s was driven by its churches, with the Methodist Episcopal Church being the leader. The Atlas describes the church. "The society has a large and commodious house of worship in the village, which building was erected in 1869. A little distance north of the village is a cemetery, where many of the early workers of Blooming Grove are buried."

Joseph Williams was an early preacher, perhaps the first. The first church was known as Duck Chapel.

How the town relates to Fairfield is general in nature. Those who wanted to trade with Connersville and Brookville would have moved their goods across the river at various points. The covered bridge later on would have simplified that. Blooming Grove's location was perfect for that. As a commercial center began to develop west of the village, it became somewhat of a crossroads.

As times changed with the introduction of the Whitewater Canal, Blooming Grove's value diminished.

But you can still go there. 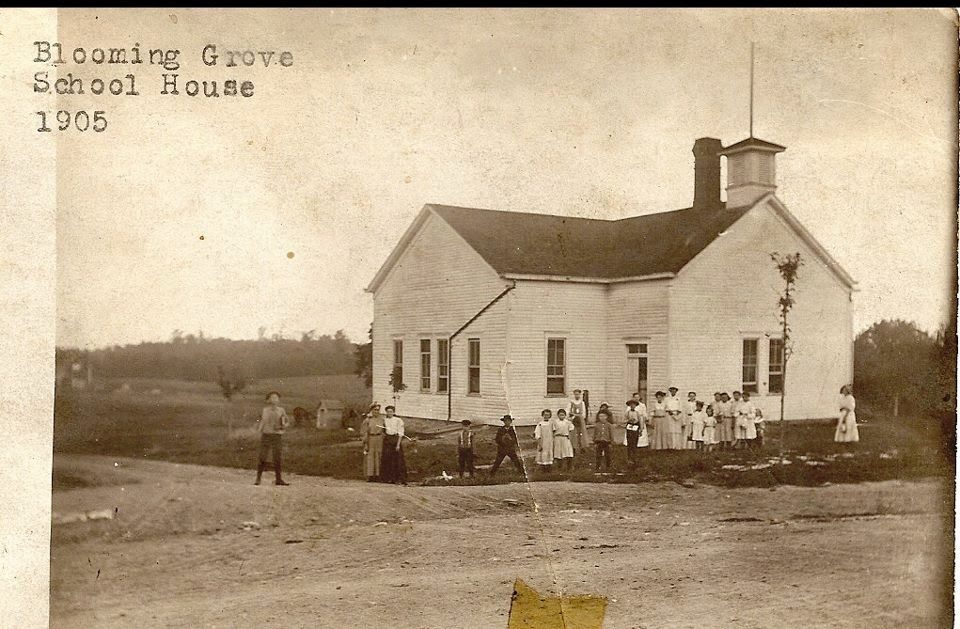 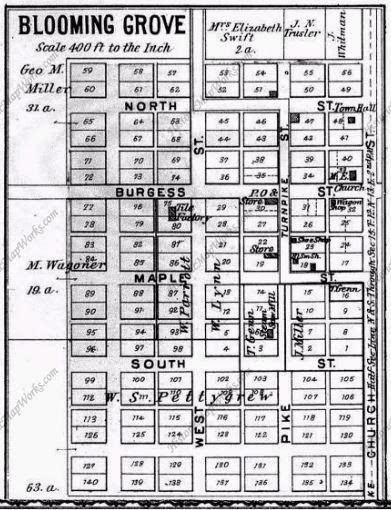 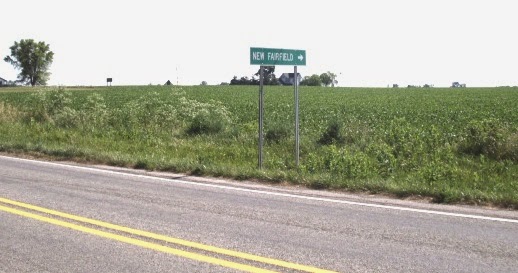 And you can get to New Fairfield from there. 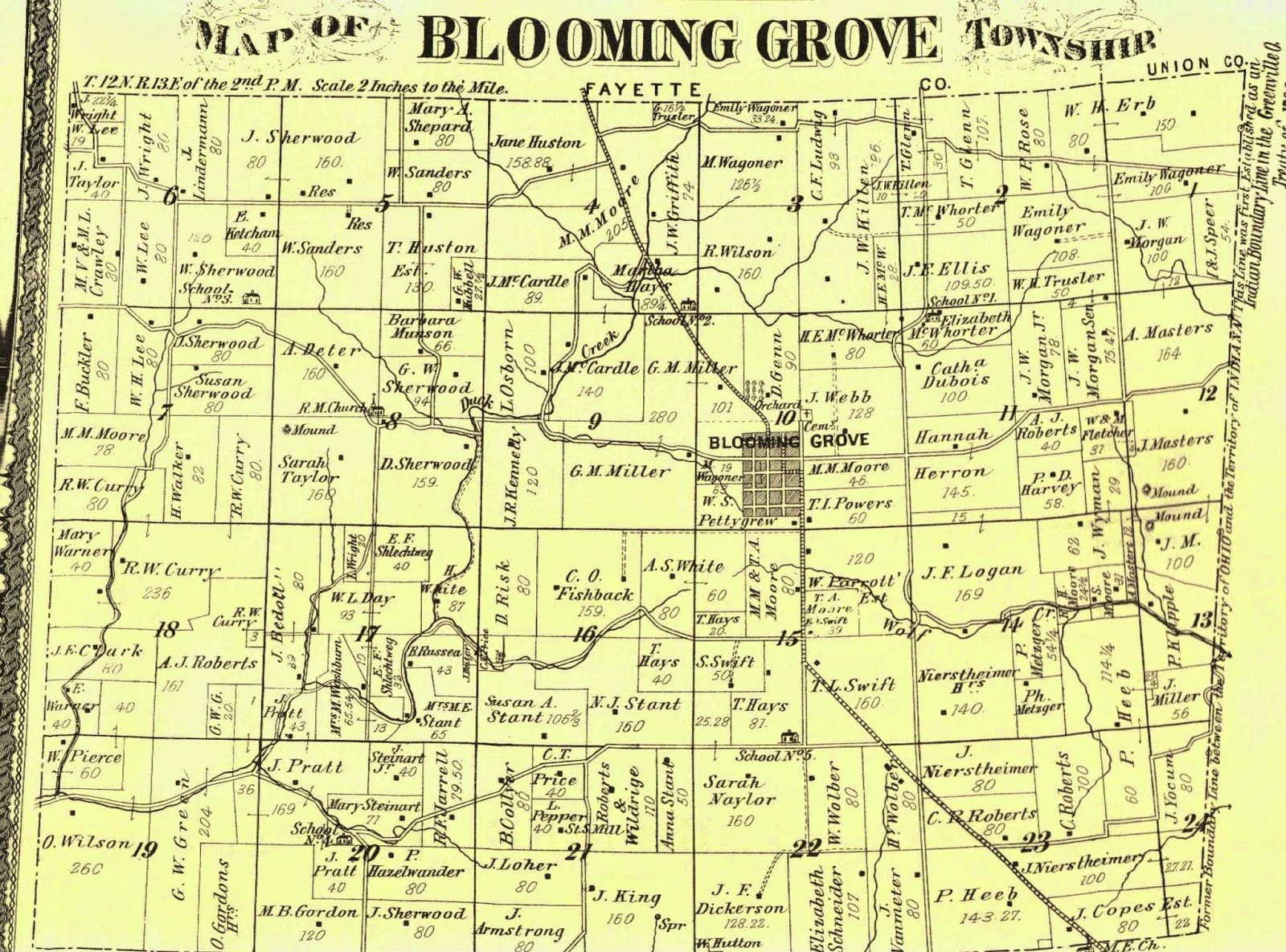 Many names of the original settlers show up on on this 1882 map. Sherwood, Harvey, Naylor, Wagoner, Erb. Also note where the "mounds" are located. Those were archaeological sites of the ancient Mounds tribes who populated the Whitewater Valley literally thousands of years ago. (You may want to save the map to your computer to get a larger view of it.)