It's safe to say that water tends to flow downstream. When there is a lot of it, the streams downstream tend to fill up with water.

That's one definition of a flood.

The folks on the Ohio River just downstream from Cincinnati had their own definition of a flood.

After a devastating event in 1882, the city of Lawrenceburg cobbled together what it thought was the solution -- a levee that was designed to protect a community that had been regularly abused by high water, mostly in the late winter or early spring months.

Sure enough, when 1883 rolled around, the relief that it couldn't happen again changed to terror when it became apparent that it would.

Archibald Shaw, the craftsman of the 1915 edition of the history of Dearborn County, describes what came next in the winter of 1882-83.

"Scarcely had the damage done by the flood of 1882 been repaired before the winter of 1882-83 set in. Rainfall began during the latter part of January and continued incessantly during the early part of February. Responding to these copious rains the Miami and Ohio rivers began to rise by leaps and bounds and the general topic of conversation in Lawrenceburg was the probable repetition of the flood of a year previous."

The levee? Yeah, there was that.

"Fears were entertained that the rents made by the break in the levee had not been repaired strongly enough to withstand another such high stage of water. But all such calculations were upset when the rainfall became so heavy that it soon became evident that the water would reach a height greatly in excess of the flood of 1882."

In other words, even a strong levee wasn't going to be high enough. The flood of 1882 had gone just over 63 feet. Residents never believed it could go higher than that.

"The Miami spent its force, but the great volume of water in the Ohio came on relentlessly and finally reached the 68-foot mark. This covered High Street to a depth of 6 feet and flooded the entire city, including a few squares in Newtown.

Just downstream, the city of Aurora was taking on water as well. "The floods already mentioned did considerable damage in the town of Aurora, but the havoc wrought there was not nearly as severe as that inflicted upon Lawrenceburg."

The towns along the Ohio breathed a sigh of relief after the 1883 disaster, convinced they'd seen the worst of it.

A winter later, they were about to see the worst of it after all.

"Hard on the heels of this disastrous (1883) overflow came the unspeakable calamity of the flood of 1884. This flood has gone down in history to the date of this writing, as the greatest that has ever happened in the Ohio valley."

An understatement to be sure but how one measures calamity may depend in large part on how it's observed.

The oddities of weather are intriguing and for a period of three winters, conditions in the winter months conspired to create a monstrosity. Frozen ground, snow cover, long periods of heavy rain, poor soil and water management.

January 1884 included "snow drifting into the valleys and in some places reaching a depth of several feet. Then came a sudden climatic change and warm rains began to descend. The city of Lawrenceburg was powerless to do anything but watch the rapid rise of the water, knowing that a terrible flood was inevitable."

"The rising waters slowly crept up the bank toward the top of the levee, and about noon on Wednesday, February 6, began to pour into the city between Elm  and St. Clair streets. Up to 10 o’clock at night but a small portion of the city had been flooded, but at that hour, the upper levee gave away and the waters rushed in with all fury across the fields and into the city, to meet the waters coming in from the Ohio."

The weather was brutal.

"Added to this buoyant force was the menace of the waves driven by a gale that prevailed for several days during the highest part of the flood. Hundreds of buildings were torn from their foundations and lashed about until they were reduced to splinters and finally set adrift to the mercy of the swift current."

Lawrenceburg and Aurora had been warned to expect a flood stage of 70 feet. They were not mistaken.

The above part of this article was written Monday morning, when we had the faintest hope that there would not be much more to tell, but the rains kept coming until last night. But the rainfall had been general through the whole valley of the Ohio, and the greatest of all floods was inevitable. Up and up and up it climbed, driving people from one refuge to another, until at four o’clock this (Thursday) afternoon, February 14, 1884, it had reached a point 6 feet above the legendary flood of 1832.

Several times after 1884, the valley was threatened with flooding, including 1897 and 1898 "which were of sufficient height that the cities of Lawrenceburg and Aurora were inconvenienced."

"To Lawrenceburg these floods were of great importance in that they gave the first real test to the immense (68 feet high) levee that had been constructed jointly by the city and the United States government. This embankment reached from Hardintown to the fairgrounds, crossed the Baltimore & Ohio Southwestern railway and followed the river bank to the Mitchell Brick Co. plant, thence it curved to the northwest and ended near the Bauer cooperage works. The materials used in constructing this work were not carefully selected and the successive floods of 1897 and 1898 pointed out this source of weakness very forcibly. Landslides were frequent and in every case revealed poor material as the cause. These defects were remedied and every known weak place was fortified against the visitation of another flood."

"On Saturday, January 19, the elements cut loose in all their fury. The wind freshened from a little breeze in the morning to a 40-mile-an-hour gale by night and hurled gigantic waves against the lower levee. Each onslaught loosened some of the dirt from beneath the cross-ties of the Big Four switch, which runs over that part of the bank. By nightfall it was evident that a great effort must be made to save the levee in this quarter, and even as the force was being organized to push this work there came such a rainfall as is seldom experienced. Water fell in torrents and, with the river at a 64-foot stage, the worst was feared. This rain, however, proved to be purely local."

It couldn't get much worse than that. 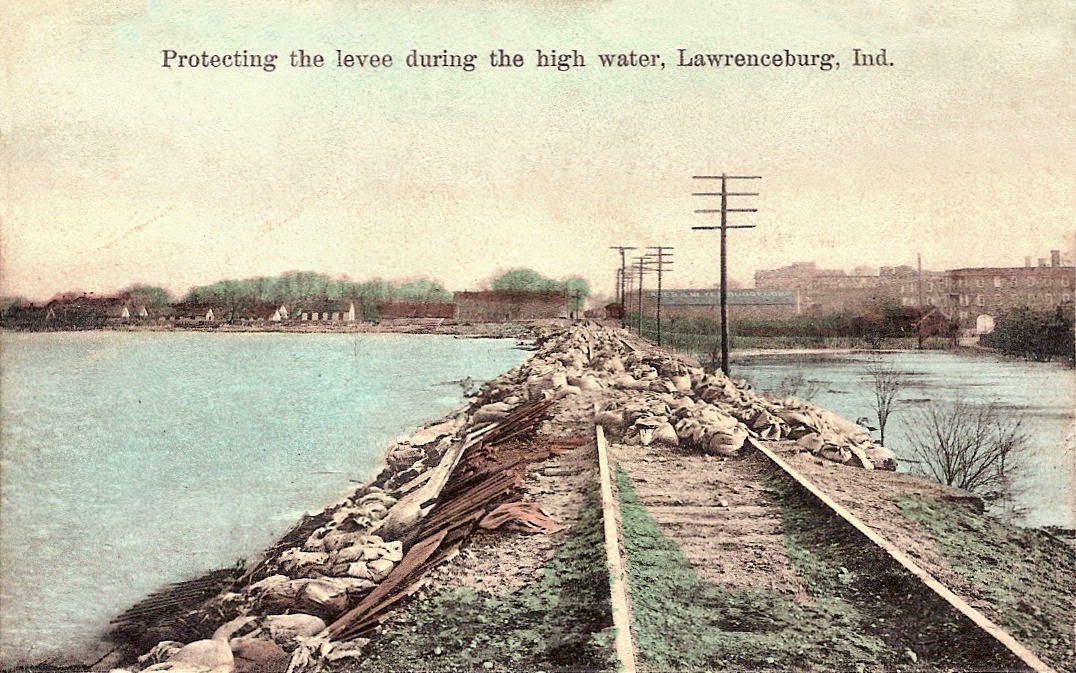 Postcard from 1907 shows how the city shored up its levee.
Erosion of the levee threatened the Big Four Railroad tracks that ran over this part of the old levee.
(Cincinnativiews.net)