Strange things happened to Franklin County in 1821. The men who ran the place decided to change the borders.

From that decision, Fairfield Township was formed from a piece of Bath Township. All in all, Bath Township didn't make out so well, since it also lost its northern half to a pair of new townships called Liberty and Union, both of which were swallowed up when the state created a new and exciting place called Union County.

Bath Township was one of the original townships in Franklin County when it was formed in 1811 and as the population changed, geopolitics being what it was, new jurisdictions were created. In those days, the township government was effectively the only real functional government. Becoming a township was a big deal for Fairfield.

It meant that elections could be held, land assessed, taxes levied and livestock counted. Schools were built and roads were laid out.

Bath Township's relationship to Fairfield in those early years is probably somewhat tenuous.  As time went on, into the 1860s through the 1880s, there are stronger links, primarily within churches.

Daniel Hansel was the first settler in Bath Township, entering his land on Sept. 30, 1805. An earlier landowner, William Forbes, did not settle on the land.  Abraham and Daniel Miller entered lands later that year. A very early frontiersman named Abraham Lee apparently spent time surveying the township in 1801-02 while it was still known as Wayne's Purchase, eventually settling in Bath Township.

One important early family name is Jacob Bake, who entered land in 1806 in what is now a part of Union County. The Bake family was prominent in the affairs of the Universalist Church and were strong abolitionists and opponents of drinking. The Bakes also at one time attempted to plat a town east of Billingsville on the Ohio border. The town would have been named Contreras.

August Reifel's 1915 history talks about one of the Bake family members:

"William Bake was the first man who had courage enough to refuse to furnish intoxicating liquors for men working at harvest and logging bees in Bath Township, he being a radical temperance advocate at a time when it was very unpopular to say anything against the drinking habit."

"From the most reliable evidence it appears that the township was named Bath from the formerly well-known mineral spring, which in an early day was used for medicinal baths. This spring is not now within the present bounds of the township, however."

* Colter's Corner is sometimes called Old Bath because when a post office was established in the middle 1800s, it was located at a country store in Colter's Corner, which is about a mile west of the town of Bath. So, as time went on, there became Old Bath and New Bath. Technically, there is no such place as "New" Bath.

According to Reifel: "Colter's Corner was established before the Civil War period and has never grown to a place of much importance."

* Bath itself was fortunate enough to have a railroad line, a bank and the township school. The township lost its post office in 1907. (They have a new one now.) The town was described as being "within a most fertile and beautiful farming section, with signs of prosperity on every hand."

* The other metropolis in Bath Township is Mixerville, which is where Franklin County stashed its nuclear warheads.

* Atlas maps from the 1880s show toll gates on either side of Bath on the road that went west to Fairfield and east into Butler County, Ohio, toward Oxford College.

In the period around 1817, Bath Township was carved into three pieces, and its northern layer became Union and Liberty townships. Those jurisdictions were still in Franklin County until 1821 when Union County was formed.

But ... there was another township in Franklin County that existed for a short time and was disbanded. Somerset Township on the county's west side was platted, organized and scrapped, eventually becoming part of Posey Township. 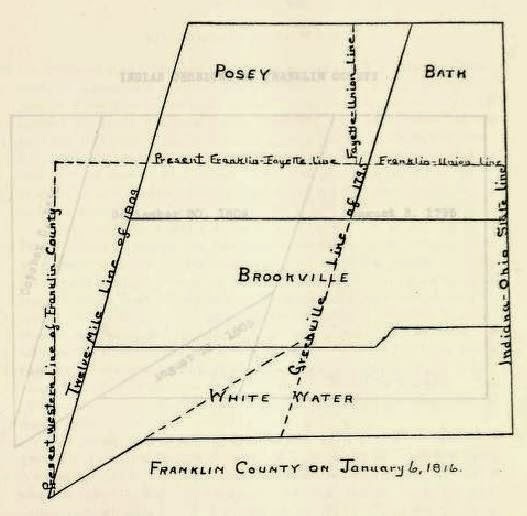 Fairfield Township was carved out of the southwest section of the then-very large Bath Township. At the time of this map, Springfield, Butler, Highland, Ray, Metamora, Blooming Grove, Salt Creek and Laurel townships were also still in the future. 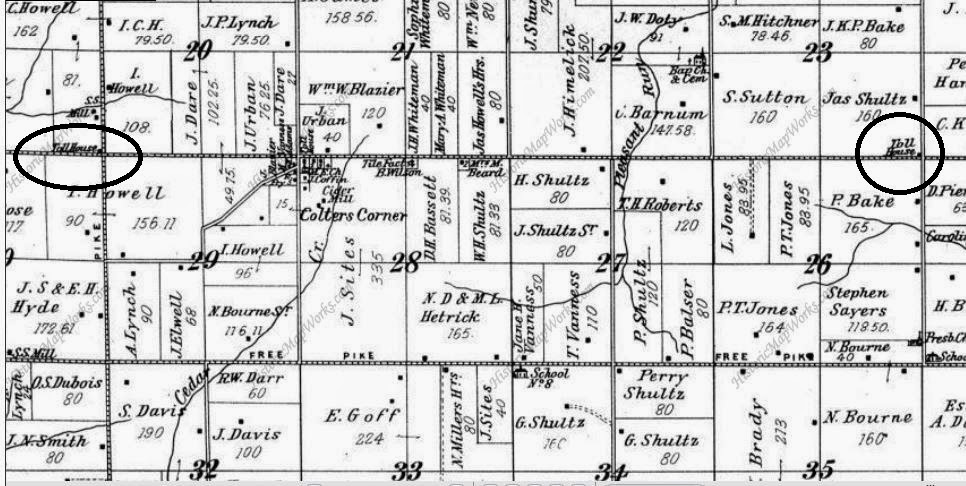 Circled areas show were toll gates were located on Bath Road in 1882. Not sure why the town of Bath doesn't appear on this map but it's where the H. Shultz property is located just to the top of the "27." J. Himelick is across the street. Oddly, this map refers to it as Pleasant Run. Newer maps call it Brandywine.

If you can tell, just to the right of the "22," that's a Baptist Church and cemetery. It is currently marked as Bethlehem Cemetery. The road that splits the "27" and the "34" is Springfield Road. Also note, B. Wilson ran a tile factory along that road for a short period of time. Businesses tended to be on precarious turf throughout the history of Bath Township.

The "Free Pike" at the bottom of the map is evidently what became Hetrick Road.