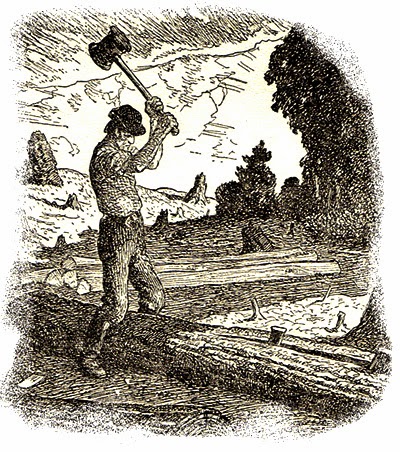 They didn't rush out for bread and milk when the weather report suggested a snowstorm was headed their way.

Life for the pioneer family was one of enterprise when it came to food consumption. As it turned out, they got to be pretty good at it.

A 1986 account by James B. Madison called "The Indiana Way" describes the domestic life of the Hoosier settlers.

"No one starved, but obtaining food was the major focus of life for the pioneer family. Not only their physical well-being but the content and rhythm of their days and years depended on the manner an means by which they put food on the table."

Obviously those who could hunt could obtain wild game. A rifle or bow and arrow would have been essential. Learning to trap wild game was a learned skill, though many of the early settlers brought that skill with them from the Carolinas and Virginia.

Hunting and fishing were skills that preceded a 24-hour supermarket.

"A rifle was an essential tool brought to the frontier, and all men could and did use it as a part of their work-day chores. The simple single shot long rifle proved an adequate tool on the early frontier partly because wild game was so plentiful.

Huge herds of deer were apparently common, large flocks of wild turkeys and geese and wild pigeons. Deer meat was the common staple for most Indiana settlers.

"No unusual skill was required to kill these and other animals, though the scarcity of powder and lead put a premium on marksmanship," Madison's book says.

Naturally, as the population grew, the numbers of wild animals decreased and, along the way, the settlers had cleared their fields and planted crops.

The settlers also learned to harvest nuts, berries and root crops. Some fruits grew wild, including the paw paw, persimmon and crab apple. "Children became adept at locating and gathering these wild foods, and natural forest honey was used to sweeten them."

Molasses from sugar maples also served as a sweetener though sugar production was not common until the 1830s.

"Culturally, the pioneer was not a hunter or gatherer but a farmer," Madison writes. "His first task was not to plant but to chop. Nearly everywhere, trees covered the land. The abundant virgin timber provided many items necessary for family life, including shelter, tools, fences, utensils and fuel. Indeed, so essential were trees to the material culture that emigrants were reluctant to settle on Indiana's treeless prairies."

But the trees presented their own obstacles, unless one considers stump removal a worthwhile and fun hobby.  "The farmer's tool was the woodman's ax, a tool as important as the rifle. With it alone, he felled trees from three to as much as ten feet in diameter, though the larger trees were often girdled by removing the bark, causing them to die."

Madison says the first crop planted "was invariably corn, the base of pioneer agriculture, as it was for the Indians and as it would remain for generations of Hoosier farmers down to the present."

Corn was ideal for Indiana's soil and climate and was an efficient grain for corn meal which was converted to various forms of corn pone, cornbread or mush. It was also quite useful in the production of sour mash whiskey. One traveler reportedly said whiskey "was drunk like water even though it smells something like bedbugs."

Livestock usually included a milk cow and a flock of chickens. Hog farming was popular though those early swine were far from the rotund creatures we know today. The "razorbacks" were quick and able to protect themselves. They were frequently left to forage on their own, eventually becoming something of a problem for settlers when they turned wild.

Vegetable gardens were obviously a necessity with peppers, beans, squash and root crops all carefully tended. Pioneer women were adroit at preserving their food for the winter. Root cellars were a necessity.

"Providing food was the major occupation for the pioneer families and they did it with increasing success," Madison writes. "They did without some desirable foods such as sugar, coffee, apples and salt, and their culinary culture was limited to boiling and frying, long and hard."

MORE ABOUT THE RAZORBACK HOG