Humans have a tendency to make order out of chaos when it comes to nature. Nature is indifferent to that.

Creeks and rivers exist for a reason inside nature's domain. They're the drainpipes that let the world's water go round and round, clearing away the debris, spreading the wealth ... all sorts of things that people really don't actually understand. Mankind's tendency to overlook the need to manage the environment plays nicely into nature's hands. When it rains, it rains.

In most years, the amount of rainfall is consistent. An inch here or there, sometimes four or five inches at a time, followed by a few weeks without any at all.

Flooding just happens. To nature, it's a matter of doing what nature does and it's really our own fault if we decide to build our houses right next to the river.

Over about a hundred-year period, it's difficult to evaluate any trends for flooding on the Whitewater, the Miami and the Ohio. High water was a regular event. In some years, more a nuisance than a calamity.

In rare instances, a dreadful disaster.

So went 1913, often called the worst flood in North American history. It actually started way upstream and it actually was a two-piece tragedy.

There were actually two floods that winter, the first coming in January. Archibald Shaw, in his 1915 history (2 years after the flood) reports:

"The freshets of 1908, 1909, 1910, 1911 and 1912 were not high enough to be classed as high waters, although on each year the water crossed the established “danger line” of 50 feet at Cincinnati. Unusually heavy rains fell during the second and third weeks of January. The mountain streams at the headwaters of the Ohio were fed by the melting of abundant snow and the continued rainfall swept it all into the Ohio with a mighty rush. By leaps the river came up out of its banks and on January 15 reached a height of about 62 feet at Lawrenceburg."

Shaw says two watchmen had been posted near the river to monitor its rise and somewhere in the night, the churning water ripped a hole in the levee, exposing its shoddy construction. The terrified watchmen were able to reach a nearby fire station and ring the bell, the standard alarm for imminent high water.

The Lawrenceburg levee was a disaster waiting to happen.

But the breach was patched with sandbags and hard work and the city breathed a sigh of relief. "The levee is Lawrenceburg’s most important asset. Since the flood of 1884 no flood waters have entered the city, which is a record of which probably no other town within reach of the Ohio’s floods can boast.”

The city was saved.

Then arrived the real flood, which came on Easter, March 22.

Shaw writes: "This flood was heralded on postcards sold over the world as the greatest disaster of modern times. For being spectacular, both dramatic and tragic, this flood never had a precedent and probably never will be duplicated. It descended on an unsuspecting and unprepared people as the proverbial lightning from a clear sky."

Easter was early that year. And the day started pleasantly enough.

"The next morning the papers told of the cyclones that swept through Nebraska and other Western states. Still there was no concern felt in the peaceful Ohio valley. That day the rain came — and such rain! From Monday morning until Tuesday morning the precipitation was about 4 inches throughout the valley of the Miami River.

"The hillsides shed this water like a duck’s back and soon all of the side streams and larger ones were pouring a flood of water into the Miami and Whitewater rivers. These streams could not contain this volume of water and it spread out over the bottom lands, sweeping away barns, outbuildings, railway stations, houses and all sorts of property as it raced along."

Bridges were swept away in rapid succession.

"At Elizabethtown, Ohio, the waters were temporarily checked by the embankments on which the Cincinnati, Lawrenceburg & Aurora electric line and the Big Four railroad run.

"This barrier only served to hold the water until it had gathered enough energy when it pushed embankment, bridges and all obstructions before it and sped on to overthrow the gigantic steel bridge over the Miami that had only recently been built to replace an obsolete one.

"This bridge was the longest single span bridge in the world at the time. Within 30 minutes it was at the bottom of the river, a mass of twisted iron and broken concrete."

An estimated 12 inches of rain fell within 72 hours, raising the Ohio River to about 70 feet at Lawrenceburg -- 4 feet higher than its waterlogged levee. The frantic efforts to raise the levee's height were no value -- the river ripped a 200-yard hole in it.

"Through this vast opening the water rushed with the force of a Niagara and struck the houses at the extreme end of Center street and then took a course toward the Newtown pond in the direction of the Catholic church."

The destruction was apparent a week later. It took that long for the water to recede. The loss of life was minimal at Lawrenceburg and at nearby Aurora and residents somehow applauded themselves for that, Shaw writes.

"The streets, sidewalks and floors of homes were covered with a slimy mud, from 3 to 6 inches in depth. It stuck tightly when it was wet and it literally froze fast when it became dry."

The 1913 flood was much larger in scope than just the Whitewater-Ohio valleys. Most streams in Indiana roared out of their banks, including the White River in Indianapolis (photo at left) and the Wabash at several points in north-central Indiana. Most of Ohio, Kentucky and Illinois suffered serious flooding. As well, the tornadoes that ripped through Omaha and other areas of Nebraska sponsored their own brand of disaster.

Brookville, on the other end of the flood, had its own problems. That will be explored in Part 4.

I have found at least one book about 1913 that is quite compelling. There appear to be many others. 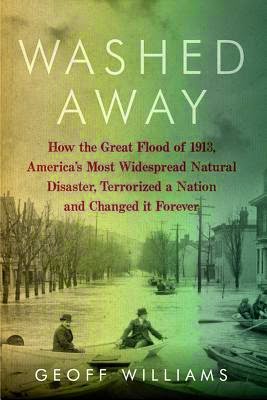 HERE'S A LINK TO THAT BOOK.