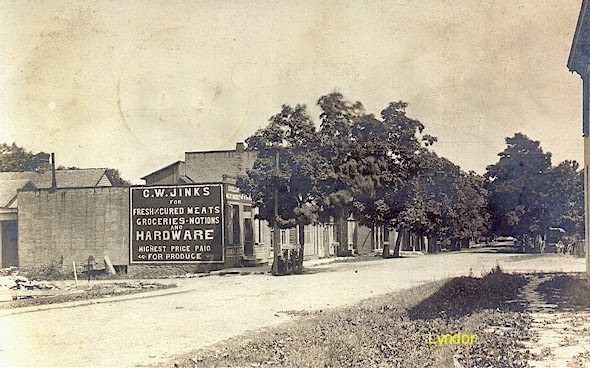 Included here is a photograph that I found on a website managed by Lyndon Irwin, who lives in Missouri.

Irwin has relatives from the Fairfield area, mainly the Buckleys, Harrells and ... Irwins. Harrells have a fairly rich history in Franklin and Union counties, mostly in the Billingsville area. Buckley was a prominent name in Fairfield.

For the moment, I am less interested in Irwin's history than I am with the contents of this photograph. I don't know who took the photo, though I have a hunch that Ben Winans is involved somehow. It is the front of a postcard and it is dated from 1908.

Curiously, the photo tells a lot of stories. If you look closely at the top right, you will see a buggy. It's parked in front of the town square, near the town's hotel. Irwin adds:

"This photo postcard was postmarked July 15, 1908 in Brookville and mailed to Mrs. L. Sherman in Philadelphia. The message says:

Dear Friend, This is a picture of Main St. in Fairfield. The Hotel is behind those trees where the horse and buggy stands. You can see the sign and barber pole. There is a barber shop connected with hotel. Helen and I are having a quite old-fashioned time. "

An old-fashioned time, it was.

Fairfield was apparently somewhat of a destination in 1908, though one wonders what appeal the valley held for a person (man or woman traveling with 'Helen') who knew somebody in the City of Creamed Cheese and Brotherly Love.

The photo also reveals that the grocery on the corner, later run by Roland Updike and eventually Willie T. Davis, was essentially unchanged at the end. In fact, most of the downtown looks very much like it did in the 1960s, accounting for changes in the trees.

The shadow at the front of the photo is being cast from the carriage factory.

It's safe to say that the picture was taken on a summer morning, probably on a Sunday since there was nobody on the streets.

The hotel became the Luker residence in later years, finally by Al Hansford. I am trying to learn more about the hotel itself but one would assume it was more of a bed-and-breakfast than a true hotel. An accompanying photo from the collection of Mary Pat Kroger says of the hotel:

"1910 dated postcard view of a woman walking past the Fairfield Hotel in Fairfield, Indiana. The note says that Mrs. Ogden is the Proprietor. A separate card with a similar view indicates this is the Ogden Hotel." Susanna Ogden's family sold the house in 1913 after her son, who managed the place . . . well, died. Jasper Younts bought it in 1914 from Aida Fry. The Lukers followed.

An 1882 Atlas entry says L.B. Doyle was the hotelier. It lists his hometown as Northhampton County, N.C. He is not one of the early settlers but his relationships to settler families isn't incidental. He is the father of Beula(h) Doyle Trusler, whose husband Alton is the son of Milton Trusler, a prominent farmer in the Everton-Fairfield area. The Trusler family shows up quite a lot in Fayette County history, in political and business matters. Milton Trusler is credited for his work in the Grange for helping establish rural mail delivery.

Doyle was a soldier in the Confederate army and came to Indiana in 1867 and married Lavina Hannah Quigley, whose family lived in the Farm Hill area south and east of Fairfield. The Doyles are buried in Sims-Brier. Doyle was a saddle maker and was closely aligned with the Loper family, which made buggies in the town. Martha Quigley, Lavina's sister, was married to Alfred Loper.

Not much about downtown Fairfield changed at any point in the 20th century. One wonders what it would look like today. 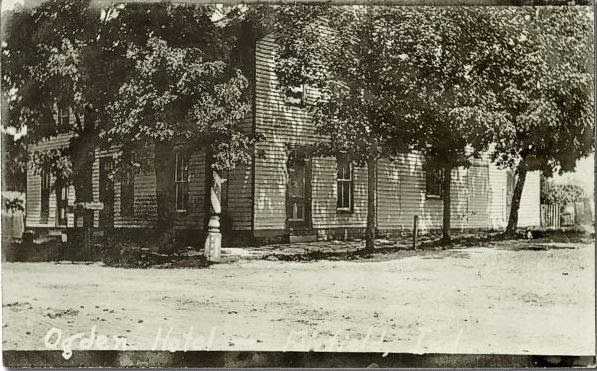