Geoff Williams, author of a narrative study called "Washed Away," introduces some insight to the 1913 disaster that set in motion a national conversation about flood control.

"The flood disaster became very localized. Waterlogged cities adopted the flood as part of their local history, and so instead of becoming known as the Great Flood of 1913, folks around Dayton, Ohio, would talk of the Great Dayton Flood. Residents in Columbus would speak of the Great Columbus Flood... . While it was a national tragedy, or at least a semi-national apocalyptic catastrophe, hitting over a dozen states and terrifying friends and family across the nation, the flood tended to be thought of as a neighborhood event instead of as part of a national narrative."

If the 1913 flood was nothing short of extraordinary, it was the culmination of a series of natural events that could not have been scripted better by Hollywood.

Williams introduces a component that would have been laughed off the table back in the day:

It refers to a weather phenomenon that occurs irregularly but has profound effect on the jetstream, rainfall patterns, a whole host of atmospheric movements.

A Wikipedia analysis of the entire series of weather events mentions a blizzard that struck on March 21, affecting several states across the northern Plains. That same day, a string of tornadoes ripped through the South.

Warning of something ahead, or just a freaky day of weather?

A day later, on Easter Sunday, more tornadoes across Nebraska and Iowa, one of them an EF-4 twister that gouged a 6-mile-long slit through Omaha.

On Monday, the storm would get worse. The bizarre weather patterns had snatched moisture from the South, cold wind from the North, more cold moisture and strong wind from the West ... and it all came together over Scratch Gravel, Ind.

Then it began to rain.

The backbreaker was that the strong winds in the West and across Indiana had done significant damage to the telephone and telegraph lines. Communication was spotty at best. In some places, nobody knew what was happening.

Writes Williams in "Washed Away":

"Had those telephone and telegraph poles and wires remained standing, historian Trudy E. Bell has suggested that the U.S. Weather Bureau might have been better able to collect information or send warnings to neighboring communities and come to a quicker understanding of what was befalling the country."

The flood would still have happened. Perhaps a few lives might have been saved, though it's doubtful. Nobody could grasp the scope of the storm.

"Weather forecasts were far from useless in those days," Williams says, "but in this instance they might as well have been. In Washington, the bureau issued an alert that a 'severe storm is predicted to pass over the East Tuesday and Wednesday'."

The East posted storm warnings from Maine to North Carolina. The bureau predicted cold weather for the Ohio Valley ... and some rain showers.

Nobody had mentioned that a tornado had crashed into Terre Haute, Ind.

The world was unaware of what was developing.

To be fair, it's likely the events were too complex for 1913 weather technology, much of which was reliant on reports that were more than a day old. The airplane was something that the Germans were preparing to use in the Great War. Many Americans were still on horseback. NASA was four letters that didn't spell anything.

By Tuesday, March 25, most cities, including Dayton and Lawrenceburg, learned that their slipshod attempts to build levees had been at best a macabre joke.

As the storm moved east, the water flowed south, roaring through towns and valleys that had never before experienced flooding. The Ohio River met the Mississippi at a record crest.

And as the storm moved east, it rained even more on the rivers in the highlands of Pennsylvania and New York, where the floodwater was sent back downstream toward ... Ohio.

Wikipedia explains the relief effort. In those days the American Red Cross was nothing much beyond symbolic.

Indiana basically addressed its own needs, though private relief funds did arrive from national service organizations such as the Rotary and the Chamber of Commerce.

What recommendations followed? In the next entry, we will take a look at that.

Click to see FOUR-PICTURE CAPTURE of a bridge about to be swept away on the Miami River in Hamilton, Ohio. (Butler County Historical Society.)

A LOOK BACK IN HAMILTON 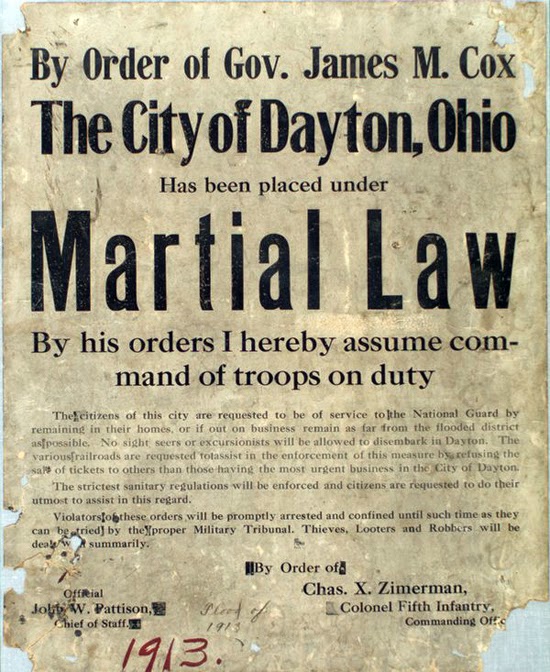