Despite our best efforts, flooding will continue. Build a dam here, dredge a creek there, install a levee ... ranging from the very first flood, sometime in the B.C. era of Noah, all the way up to the one that soaked somebody's basement last Friday ... yes, nature makes the rules.

When it rains, the river rises. And in December of 1936, the problem started. Lots of snowfall in the hills of Western Pennsylvania. Sudden warm spell, temperatures in the 60s, the snow began to melt.

In January, it began to rain. Eighteen days later, the Ohio River at Evansville had risen from 33 feet to 54 feet, spread into the city and ... all hell had broken loose.

Tributaries feeding into the mighty Ohio and Mississippi rivers frequently outgrew their banks, flooding fields and low-lying areas of towns that were platted by people long dead, perhaps smarter than the ones who continued to live in them despite the annual risk. ("Most days, it's great here.")

The Ohio-Mississippi flood of Jan. 26-27 of 1937 rivaled the 1913 tragedy in its devastation, though the 1913 flood is considered more devastating because of its larger geography. But 1937 features some awe-inspiring statistics.

The river at Cincinnati, at the height of the 1937 flood, was somewhere near the 80-foot mark, or a full 14 feet higher than in 1913, and 25 feet above flood stage. What this meant probably depended on where people lived. It was raging, full of debris, burning oil drums ... creatures, large and small. And boats being sent downstream at incredible speed.

"The scale of the 1937 flood was so unprecedented that civic and industrial groups lobbied national authorities to create a comprehensive plan for flood control. The plan involved creating more than 70 storage reservoirs to reduce Ohio River flood heights. Not fully completed by the Army Corps of Engineers until the early 1940s, the new facilities have drastically reduced flood damages since."

Drastically remains the operative word. No month in Cincinnati history ever recorded more rainfall than did January, 1937.

"With crashing suddenness there swept down upon the Tri-State district a major calamity which stands alone in the annals of the Ohio valley. All news gave way to stories of the rushing waters which poured into basements, boiled from the sewers and wholly disrupted life as it is generally found in Evansville. Tell City was paralyzed. Cannelton was hard hit. Other communities along the Ohio sent out desperate pleas for aid."

* About 60 percent of Louisville, Ky., was flooded. About two-thirds percent of the population was forced to evacuate. Some areas of the city simply disappeared.

* A few communities along the Ohio were so badly damaged that they never recovered. One was New Amsterdam, Ind.

* Indiana recorded no deaths as a result of the 1937 flood but set up a flood control commission anyway because the problem needed to be studied by people who didn't get flooded.

* Fairfield, Ind., was never threatened. Its bridge was never challenged.

The 1937 disaster was one of a string of terrible events to strike America in the midst of the Great Depression. More than 20 percent of the country was enduring the last shreds of the most significant drought in history, a period known as the Dust Bowl and immortalized in the novel/movie "The Grapes of Wrath."

Not much was going right for the country, which was also staring down the evil sneer of a despot named Adolf Hitler. Off to the left, Japan was invading Manchuria.

The Tennessee Valley Authority had been set up in 1933 to provide electricity and flood control in the areas south of Kentucky. Much of that was to address flooding on the Mississippi, which had its own problems, the worst coming in 1928.

Flooding was normal. It still is.

But it took 1937 to force Congress's hand on flood control in the Ohio Valley.

Brookville Reservoir was authorized by Congress in 1938 following the 1937 floods. But World War II and the Korean War delayed appropriation of sufficient money to build it. In 1960, Indiana agreed to pay 22.5 per cent of the cost of construction of water supply features of the project.

Next, that one gets a look.

In March 1997, the Ohio River crested just under 65 feet, submerging low-lying Cincinnati streets and some areas of the river cities in northern Kentucky. The worst area hit was Falmouth, Ky. in Pendleton County. There, the Licking River spilled over its banks and submerged much of the town.


“We started getting water in the basement of my father’s furniture store in Covington,” recalled 94-year-old Dorothy Seigel of Kennedy Heights. “But we always did when it flooded. So, we didn't think too much of it.” 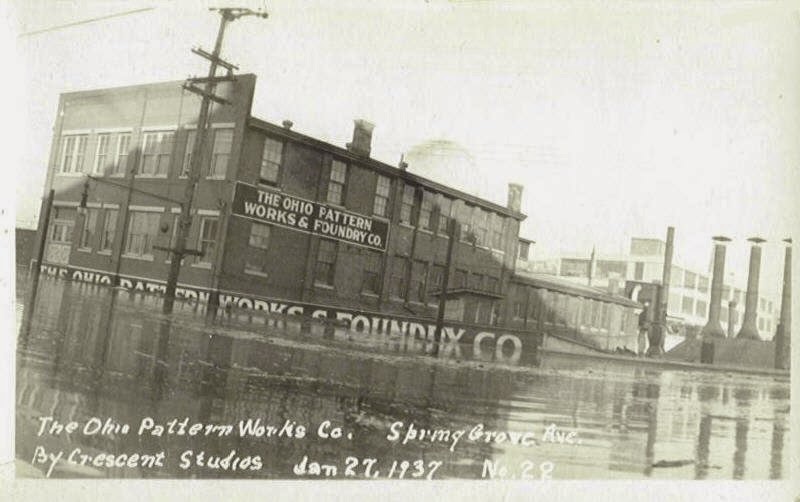