We almost had our own canal 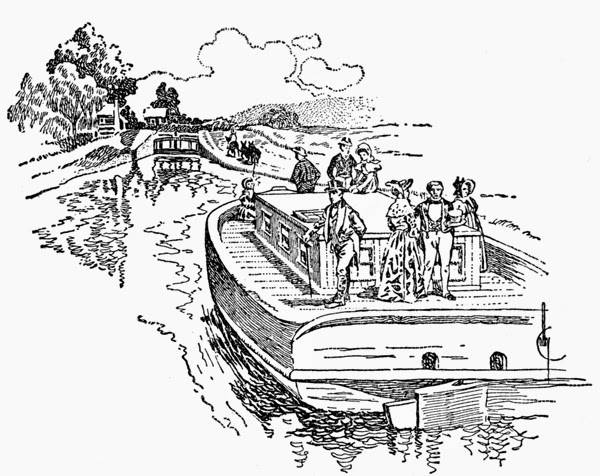 "Since you're building one already, mind if we join you?"

Perhaps nothing in the 19th century was more ridiculous than a proposal to dig a trench from Richmond to Brookville, but the year 1839 was full of surprises.

So, that's exactly what some folks in Richmond decided to do ... dig a canal from the heart of Wayne County straight down the pike along the East Fork of the Whitewater River, where it was planned to connect with the already-in-progress Whitewater Canal being carved out along the West Fork.

Canals were never really a good idea anyway but for a time, Indiana and the Whitewater Valley profited from their existence. The advent of the railroad was about to doom the canals anyway by the 1840s and a couple of major floods in 1847-49 took care of the rest of it around Hagerstown.

The canal system was complex and can devote itself to volumes of interesting research. We are, for the moment, focusing on the ill-fated Richmond-Brookville Canal, a 33-mile venture that doesn't show up in many history books.

August Reifel reprinted an essay by historian James Miller in his 1915 Franklin County history, and Miller's tale was repeated in a couple of other publications.

The project was promoted as turning Richmond into the "Pittsburg of Indiana," which presumably was a good thing since there was already one in Pennsylvania. Times, they were a'changin' and the movement of produce and people had become a priority.

Beginning in 1834, interest in a canal along the East Fork grew stronger, according to Miller's research. Canals were being dug all over Ohio and Indiana. The future was in the trenches.

In early January of 1837, the Indiana legislature approved funds to complete a survey along the East Fork for a canal that would connect with the main Whitewater Canal somewhere near Brookville. Presumably it would follow the East Fork and wrap around town and connect somewhere near Stavetown. I haven't found any maps that show the complete route.

A man named Colonel Simpson Torbet completed the survey. After that, a group of private investors set up a canal association and attempted to raise funds to build the thing.

The line of the canal followed down the east bank of the river for a distance of 11¼ miles, when it crossed over to the west bank at Dam No. 3, and followed that side of the river for 12¼ miles, passing into slack water below Hanna's creek, and recrossing to the right bank at Dam No. 4, above Fairfield, and continued down that side of the river to Brookville. (In effect, the trench would have been through the middle of Elmer Doerflein's farm and east of the covered bridge.)

This is the route according to the original survey, but it must have been re-located, for Mr. George Templeton informs us that the line crossed over to the west bank at the southwest corner of his farm, near where the school house stands on Fairfield Pike, and that there was to have been a feeder dam at that place. This would correspond with the locks located on the John Logan, Abner McCarty and Amos Butler lands, besides avoiding some extensive bluff excavations, and is a far more practicable route than to have continued down the east side of the river from the dam above Fairfield to Brookville. (So they changed their minds!)

Colonel Torbet says in his report of the proposed improvement: "With the exception of the bluffs and the lockage the valley of the East Fork is of the most favorable character for the construction of a canal. There would be many advantages growing out of its construction, the benefit of which can scarcely be anticipated. It would be the channel through which all the trade of one of the most populous, fertile and wealthy regions of the western country would pass. Ricmond, situated at the head of navigation, with its vast water power, extensive capital, and enterprising inhabitants, might become the Pittsburg of Indiana."

Torbet, by the way, died in early 1838, and was not around to see the project take off like a lead balloon.

That spring, a canal association was set up in Richmond and approved a charter. A stock offering was planned and the builders of America set out to do justice to the principles of pioneer capitalism. James Osborn of Fairfield was chosen as chairman. In April of 1839, the canal association began selling stock in its new enterprise.

Stock sales were brisk if not uneven and an estimated $215,000 was raised for the project. Not very many Brookville or Fairfield residents bought stock, however, according to Miller's research. Private contractors bid on the work along the various sections.

In September of 1839 Richmond and Brookville papers contained advertisements calling for bids for constructing sections 1, 2 and 3, near Richmond; 13, near Abington; 20, near Brownsville; 40, near Fairfield, and 52, near Brookville. The advertisement states that the sections to be let "embrace a number of mechanical structures, consisting principally of dams and locks, with some heavy bluff excavations." Specifications of the work were to be posted at Dr. Matchett's tavern in Abington, Dr. Mulford's tavern in Brownsville, Abijah DuBois' tavern in Fairfield, D. Hoffman's tavern in Brookville, and at the company's office in Richmond.

All four miles of it.

Miller writes in his essay, published sometime in the 1880s:

I cannot learn of any work done near Brookville, but on section 40, near Fairfield, the contractors, Henry and Harvey Pierce, excavated about one-and-a-half miles of the canal down the east side of the river to the farm now owned by Misses Sallie and Missouri Hanna. Traces of excavation can also be plainly seen on the farm of James Blew. Sections 1, 2 and 3, near Richmond, were let, and from a mile and a half to two miles of excavation made. No use of these excavated portions was ever made until 1860, when Leroy Larsh erected a grist mill on the portion near Richmond.

This canal was be about 33 miles long and would have a drop in elevation of 273½ feet. It would require 31 locks, five dams, two guard locks, two aqueducts, seven culverts and two water weirs with gates. Each lock would be 90 feet long and 15 feet wide. The estimated cost was $508,000.

Locks near Fairfield were to be located near Hanna's Creek, Wolf Creek and the Templeton farm south of town, as well as at the Logan farm, the McCarty farm and the Butler farm before going through Brookville, where two more locks would be located. 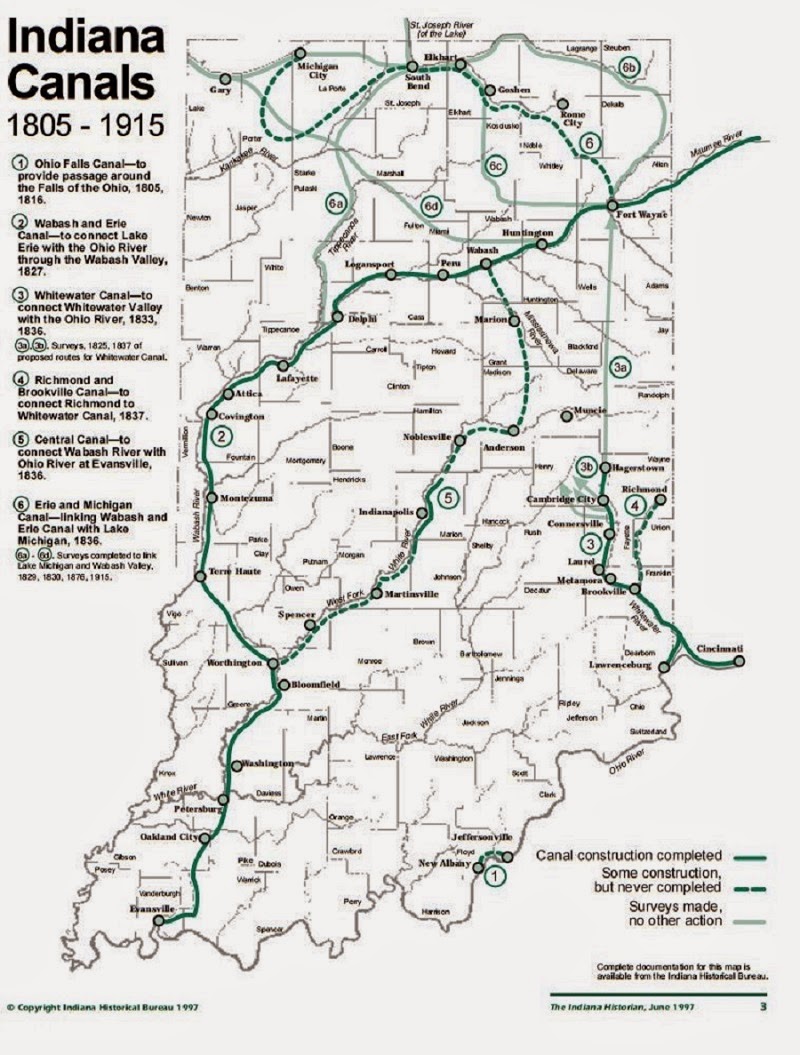 James Miller's essay says the Fairfield portion was dug in this area.