Where went the poor?

One of the more unfortunate parts of early pioneer life in the Whitewater Valley was, coldly, where do we put the poor?

And the poor were always abundant. Even those who came prepared to survive in the cruel Indiana wilderness, at times it just didn't work.

August Reifel's 1915 history of Franklin County, explores the uneasy custom of "farming out the poor."

"According to the custom which prevailed throughout many of the older states of the union, in the early part of the present century, the poor were farmed out (i.e.) cared for by whoever would undertake the duty for the least money."

It was certainly not something an elderly or downtrodden person would want to face. Typically, it was the women and the children, those unable to find suitable work. Losing the home was typically the first order of business.

"Each township had an officer entitled an Overseer of the Poor. Sometimes there was a board of two or three of these officers, who were either elected by the people or were appointed by some authority, such as the court, or by the Board of County Commissioners.

"The first record of this nature appears under date of May 15, 1813, at which time George Cain was allowed the sum of  $18 for board and clothing for Abel Perry, a pauper, from January 1 to May, same year."

In those early days, Fairfield Township would have been represented by George Hollingsworth and John Templeton.

"From this time forward until 1824, the system seems to have been in use by 'common consent,' and without the necessary statutory regulations for all the details which might arise from time to time."

In 1824, the Indiana General Assembly passed legislation that clarified management of the county "poor farm" process. The legislation essentially enabled the older laws but simply made it a statewide procedure.

In 1834, the legislature modified the law when "an act to authorize an Asylum for the poor of the counties of Franklin, Fayette and Union" was passed.

"The commissioners of these three counties or any two of them were required to meet at the town of Fairfield on the first Monday in June of that year, and then and there take into consideration the expediency of erecting an asylum for the joint use and accommodation of the counties included."

The three-county commissioners agreed to establish a poor farm on 208 acres in Jackson Township in Fayette County. "A small brick building was erected at a cost of $500, and in the spring of 1835, the property was occupied by the regular inmates."

The joint asylum was abandoned in 1856 when Franklin County purchased a farm owned by Thomas H. Stringer near Brookville and "erected suitable buildings for the establishment of an asylum. Since that time, some important additions and other necessary improvements have been made, which make the property extremely well ordered and pleasant."

As well, the townships had begun to enact a poor relief program to help the unfortunate and in some cases, preferred that over sending people to the county farm.

An 1884 lithograph of the Union County poor asylum,
which was located in Harrison Township,
just northeast of Liberty, near Kitchel. 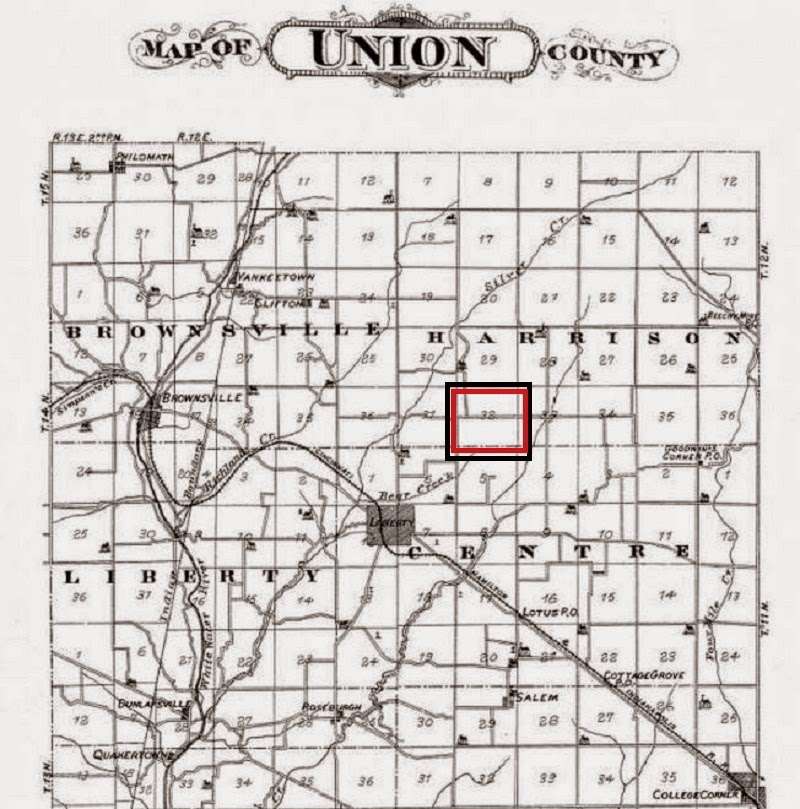 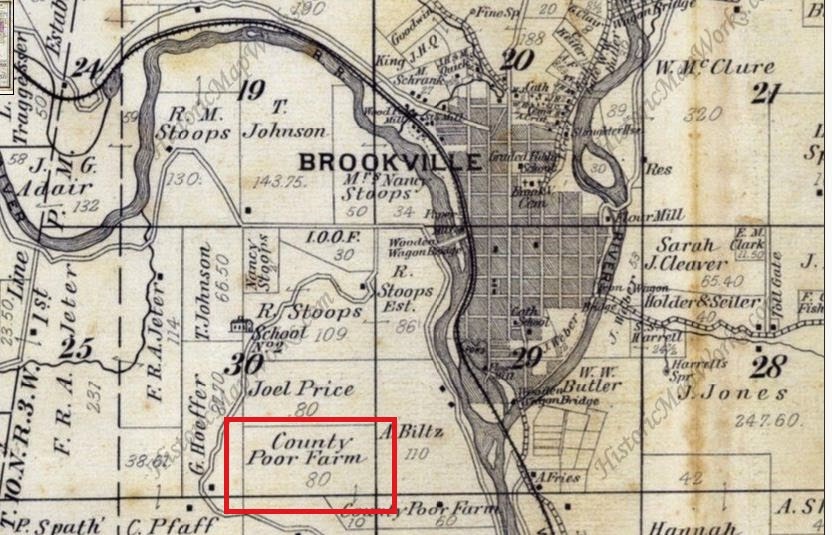 Franklin County poor farm, 1882 (where the fairgrounds is located now) 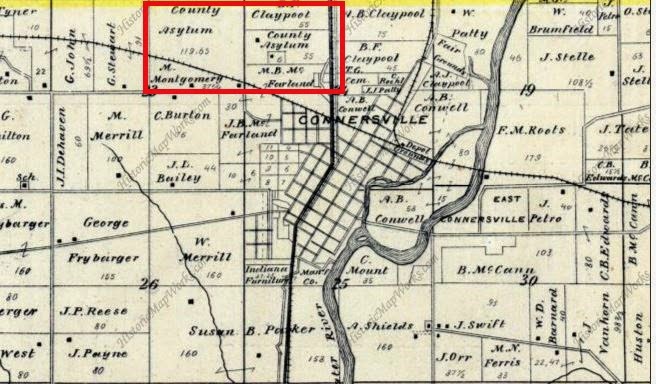 Fayette County moved its poor farm northwest of town in around 1856. I cannot locate a map that shows where the original 3-county asylum was located in Jackson Township.