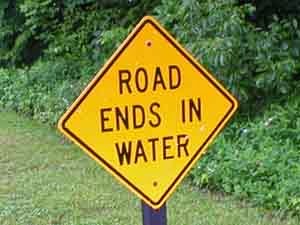 Marilyn Luke Gausman and Julie Schlesselman, who put together the Fairfield book in 2010, present an observation about the town.

"During the 1950s and 1960s, when many small towns throughout the United States were celebrating their sesquicentennials in grand fashion, the town of Fairfield had no reason to celebrate or even plan for one, for by 1965, the year it should be celebrating, the little town already knew of its inevitable death.

By 1970 the town had been abandoned and its people scattered virtually everywhere. Many moved to Liberty, Blooming Grove, Brookville or Ohio. Several families purchased lots in New Fairfield, but that area never evolved into what the original town was.

Eventually all buildings in Fairfield were razed or salvaged. Nothing was left standing; anything that could possibly float to the top of the waters to be impounded in the upcoming years, simply vanished. Ironically, the town forsaken in the name of flood control rarely flooded; and in a strange twist of fate, the land where the town once stood was under water forever by 1974."

This blog is a quick-hits attempt to grasp the history of the town, based on some rather diverse resources. Nearly everything we will see here is the product of research. There isn't any new information about the history, at least none that we are obviously aware of.

Key sources of information are: Reifel's history from 1915, complex and unwieldy; the various ediions of the Indiana History Magazine, which date back to 1905, also complex and cumbersome; and, our own Fairfield history recollections, "Town Under the Lake" and "Fairfield Schools." I have yet to explore Virgil Davis's history, so that will yield more insight. As well, an 1882 Atlas essentially parrots what we know from other sources.

This is not an attempt to present the history of Fairfield. That's neither practical nor sensible. Our Fairfield books have done that, in ways that are far more personal than a straight-shot linear chronology.

But it is an attempt to sustain interest in the town, its history and the people who lived there. Much of what we know is enhanced by our rich and diverse imagination. Some of that, we have learned, is just plain wrong. None of it is irrelevant.

I have some insight about the churches, the schools, life in the valley as it relates to the native Indians, and some of the characters who brought it all together. These will be quick hits, short on yawn, long on wow.